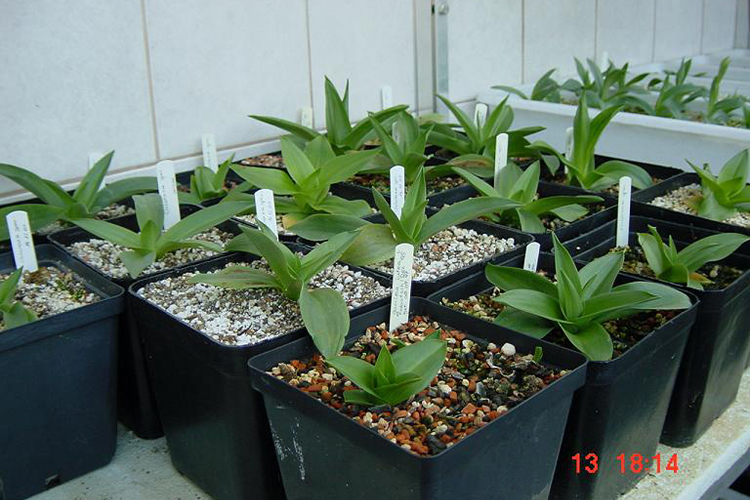 The genus Chloraea is distributed in South America, and comprises 45 species (Correa, 1969). It ranges from Fireland along the Pacific side of the Andes as far as Peru, and on the Atlantic side as fas as southern Brazil. The genus Gavilea (appr. 15 species) is restricted to southern Chile, southern Argentina and the Falklands. Megastylis (7 species) is near-endemic to New Caledonia, M. gigas is also found on the New Hebrides.

Advances in the fields of molecular biology and systematic research recently gave rise to new ideas in the phylogenetics of orchids. For this, however, researchers require fresh flower material, which is difficult to obtain due to the lack of plants in cultivation. This was also one of the reasons for germination experiments in these genera.

Seeds from mature and already dehisced capsules of various Chloraea species (C. cylindrostachya, C. magellanica, C. reticulata and others), Gavilea lutea and Megastylis sp., as well as immature fruits of Gavilea lutea, were used for the investigation. Their seed structure is similar to that of related genera in Australia (Caladenia, Pterostylis, Thelymitra, Pachyplectron from New Caledonia).

The seeds were badly contaminated with bacteria and fungi. To prepare them for sterilisation before germinating them asymbiotically, the seeds were treathed in a 1% saccarose solution for 24 hours at room temperature. This causes fungi like Aspergillus or similar (which are normally hidden under the testa and are therefore not affected by the sterilizing agent) to grow, and therefore they can easier be killed by the subsequent desinfection.

The seeds of the investigated species proved to be very sensitiv to high hypochlorite concentration and prolonged exposure, similar to the Australian genera Cryptostylis, Thelymitra, Caladenia etc.

The correct degree of bleaching of the Chloraea and Gavilea seeds was achieved by a 6 or 7 minute long treatment with a 0,5 % solution of Sodiumhypochlorite. To reduce the surfache tension and to avoid an after-effect of the hypochlorit, some Tween 80 (Polyoxethylenesorbitanmonooleat) was added.

A SM-medium was chosen (Malmgren, 1992). This medium shows little toxicity towards the seedlings, as the anorganic nitrogen is fully replaced by amino acids as source of nitrogen.

The flasks were put up in darkness at a temperature of 22°C: Germination took place in about 3 weeks. The rate of germination was rather low, between 5 and 10 % depending on the species. It can be assumed that this germination rate can be improved by better pre-treatment of the seeds with 0,5% H2SO4and 03%NaOCl or CaOCl, as well as by fresh seeds.

Immature fruits of Gavilea lutea were also used. The time the maturing of the unripe capsules takes was unknown. The seeds looked whitish and translucent; the testa cells were not yet dead and lignified. Seeds sowed on a SM-medium produced an almost 100% germination already 2 weeks later.

The protocorms reached the whipping-top-stages one month after germination. The seedlings were transferred onto a new medium and exposed to light, and elongated to form shoots and narrow, 4-6 cm long turntip-shaped roots. After one year the seedlings were 4-7 cm tall, and ready to be transplanted.

The problems, which are evident during the in vitro phase, are very similar to those which were encountered in Himantoglossum. Some of the protocorms proliferated, although it was avoided to add any auxines. But protocorms grow and differentiate well when transferred to a new medium. A cool treatment, wich would induce the formation of turnip-shaped roots, was not necessary. Protocorms became necrotic when placed too densely, similar as in Ophrys and Orchis species.

Also symbiotic germination experiments with ripe seeds of Chloraea were undertaken, as most of the research oft he last few years has dealt with this aspect and has yielded good results in several genera.

The Oat-medium (Clements & al., 1986) was used for sowing and transplanting:

Strains of fungi which have already been sucessfully used in other genera were used for this experiment. Germination and efficient growth was observed on two fungi. Fungus I was isolated from Pterostylis, fungus II from Orchis morio. Both seem to belong to the genus Ceratorhiza (Ceratobasidium-telemorph), as seen in the morphology of their hyphae (lactophenolblue preparation) and staining of their cell nucleus (acridinorange preperation).

The protocorms were transplanted onto fresh oat flake-medium every 12 weeks. After 6 months the seedlings were ready to be planted out, but their roots were not as strong as those of the assymbiotically raised plants.

Only a single symbiotic experiment could be made in Megastilis sp. due to the scarcity of seeds. Under identical conditions protocorms developed on both fungi which grew to especially fleshy seedlings without elongating their shoots too much.

Two types of substrate were tested. With view to the natural habitat Type I consisted of neutral, grainy clay, to which seramis and perlite were added to increase drainage. Type II (which is a mixture well proven for many terrestrial orchids) consisted of 1 part peat-free bark-compost and 3 parts seramis:perlite: washed Leca 2-4 mm (1:1:1). Seedlings grew well in both substrate types. Seedlings are highly sensitive to low humidity in the first few weeks, which can not be observed in other seedlings. The substrate itself should be fairly dry, as overwatering leads to the loss of the plants. The seedlings which were raised symbiotically proved to be more resistent to rooting. Also plants passed on to other growers developed well, which shows the feasibility of cultivation oft he species. The seedlings of Chloraea, Gavilea and Megastylis are grown together with other plants from the temperate zone. Generally speaking the cultivation is similar to that of mediterranean species. While the temperature in the habitat of Megastylis on New Caledonia ranges from 0 to 30 °C, Chloraea and Gavilea which are plants from higher altitudes at the foot of the Andes are adapted to snow and temperature below freezing.

It will still take some time fort he seedlings to reach flowering size, but the successful propagation and cultivation show that one can get around the theory of Perner (1992) who proposed to let specialists remove some plants from the wild for cultivation experiments. Botanical gardens and other public institutions usually deal with the cultivation of a wide range of species, and are therefore not able to cultivate difficult terrestrial species successfully. Very few specialists, mainly hobbyists, are capable of that.

Also when Phragmipedium besseae, discovered in Peru by Elizabeth Besse, was introduced to cultivation some collections suffered total loss. Now even beginners can grow plants successfully on their window sill. It was similar with Goodyera macrophylla. One could add another few exemples here. The reason for the losses among the imported plants is not the high degree of mycotrophy but this is merely caused by severe mistakes in their cultivation. It is not possible to simulate all the climatic factors oft he natural habitats under glass house conditions, and imported plants have little tolerance when it comes to mistakes in cultivation.

There are still large, undisturbed populations of Chloraea and Gavilea in Patagonia and in the Andes. These are found in heavily guarded National Parks. On the other hand the South American countries do not even issue export permits for scientific purposes, and any legal import to Europe is therefore not possible.

It appears that the degree of mycotrophy (this term was introduced by Sadovsky and is highly disputed now) of Chloraea, Gavilea and Megastylis has been overestimated. This article shows that both propagation and cultivation are possible. To solve the problems of the mycotrophy the removal oft he roots is necessary, to establish the identity and role oft he symbionts.
The need for flowering material of related genera like Bipinnula, Codonorchis, Geoblasta and Rimacola (Australia) shown the need for further research in this area. The main difficulty is the access to seeds.
Altough enough seedlings were now obtained through in vitro cultivation, it will depend on the further cultivation whether the efforts will be rewarded with well established plants and flowers.

Mr. M. Döpper/Ledenitzen is thanked for valuable advice, Mr. Kurzweil/RSA for the translation into the English version. I express my sincere thanks to Mr. J. Böhm/Homburg and Mr. G. Deutsch/Graz for good collaboration. Many people have helped with material of pollen and seeds, among them Mr. H.E. Brennecke/Hoisdorf, Mr. Dipl. Ing. A. Mrcvicka/Perchtolsdorf, Mr. J. Poweleit and Mr. P. Poweleit/both Neumünster, Mr. A. Sieder and Mr. F. Tod/both Botanical Garden of the University of Vienna, and Mr. J. Sommer/Mörbisch. I am especially grateful to Mr. K. Robatsch/Klagenfurt for his assistance enabling me to carry out this study.